The Challenge of Gluten and Corn Free Pasta

One the foods that I miss most from my pre-food allergy pre-gluten free life is pasta.   Especially during the cold winter months, I find myself wanting just a big comforting bowl of that gluten filled deliciousness. I have not had gluten at least knowingly since November of 2011.  That was when I had my last bowl of pasta.  It was delicious…and I was sick all night.

My craving for pasta didn’t disappear, but I knew I would have to find a different way to eat it.  I know there are many gluten free pastas available, but for me it’s not that simple; I also run into trouble with my corn allergy.  As far as I can tell corn seems to be a most common ingredient in GF foods.

Many people recommend rice pasta to me.  I do fine reaction-wise with plain rice ones, like Tinkayada, but they come out a little too mushy for me.  They don't compare to "real" pasta. I use them as noodles in soups, however I find myself disappointed when I try to build a meal around them. Eating it makes me miss my gluten eating days more. 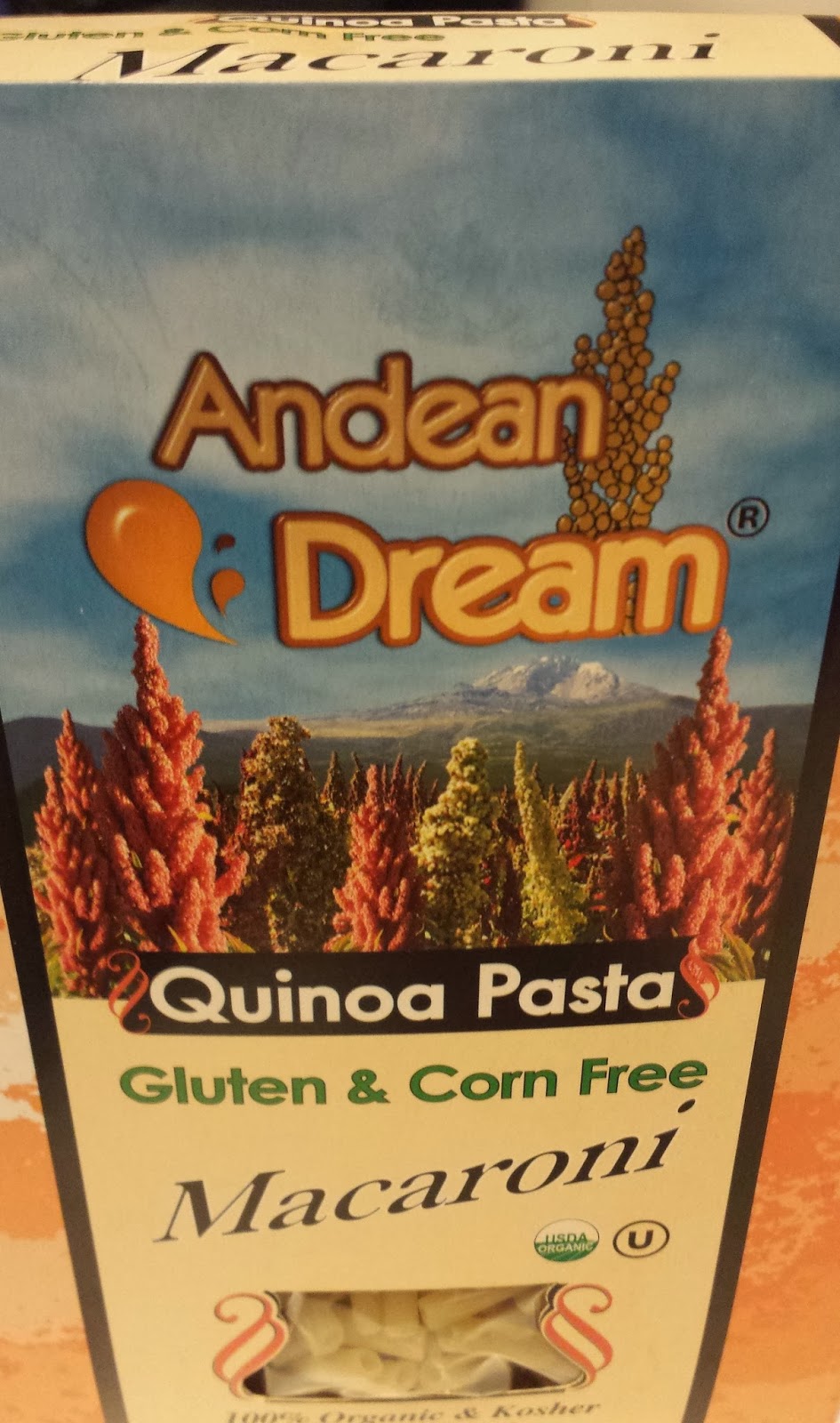 It was hard to contain my excitement when I recently discovered my true GF, CF pasta substitute.  I saw a product at the market that I had never tried--Andean Dream Quinoa Pasta.  It really is a bit of a dream.  When I tried it, I knew this was a whole new level of GF pasta.  Its ingredients are simple quinoa and rice and no corn.  (They actually advertise that their products are both gluten and corn free.) The main difference between the Andean Dream and the rice pastas is that the texture is much more similar to how I remember regular pasta.  It actually tastes like al-dente pasta and it doesn't become gooey a few minutes after cooking.   The texture is just right and the taste is subtle so it doesn't over power whatever other ingredients you decide to add.  I've been making it with butter or olive oil and sautéed vegetables.

The true test is that this is the only GF pasta that my husband will eat.  Oh and I forgot to mention, it can be used for a mean macaroni and cheese.

So I can now officially report that my two-year pasta problem has ended. For those of you with Celiac Disease or Gluten Sensitivity, what's your favorite GF pasta?

**Please note: I have no relationship with any companies whose products are mentioned in this or any other post.**

Everyone should read Julia from Reasonably Well’s excellent post entitled Tufts Study: Despite Burden Sjögren’s Syndrome May Not Impede Function that discussed new research on Sjögren’s Syndrome and cognitive difficulties.   You can read the whole extremely informative post here.  I’m going to comment on some of my favorite parts below and add some of my own reactions.

The Tufts Study concludes that Sjogren’s patients despite their perception “appear to function at a level comparable to their healthier peers.”  This is obviously good news, but Julia addressed some of the potential flaws with the study and raises research questions for the future.

Starting with the issue of fatigue, Julia writes:


I noticed that the assessment of fatigue…was not located in the physical section but rather in the Mental/Emotional locale.  There were no physician evaluations of joint pain, pure neurological problems (as opposed to neuropsychiatric), pulmonary issues, renal problems….to name just a few well-documented extra glandular manifestations of Sjögren’s.

She goes on to say (I love this part).

Since fatigue is one of my most disabling symptoms of Sjs and I'm a bit touchy about labeling fatigue as an all in your head symptom, I found it interesting that elsewhere in the discussion section of this study, fatigue is included under the description of "neuropsychiatric problems".

Well, I must say I’m touchy about this too.  And isn’t their bias in the research if fatigue is classified as neuropsychiatric from the beginning?

And I have had a similar experience to Julia where as she writes that for her tired=stupid.  What a perfect equation. I completely relate.  When I’m having complete autoimmune exhaustion, I also have what I would call brain-fog.

This idea also got me thinking.  Do studies need to include both disease activity and cognitive function? Would it be worth exploring whether “flares” have both cognitive and physical impacts?  And Julia also brings up another super super important point about study design:


This was not a longitudinal study. Study authors would have no data to support their discussion of length of disease related issues.

In another small controlled study on the subject conducted by doctors and psychologists, including the Director of the Penn Sjögren’s Center, Dr. Frederick Vivino, found significantly lower IQ scores and lower verbal memory scores for the Sjögren’s group (click here for the study). No statistically significant differences were found on concentration and processing speed, visual memory, or executive function.  Interestingly Tufts and the Penn Studies used different measures of cognitive function.  While the Penn study also clearly had its limitations with only 17 participants and it did not occur over a period of time, the authors tend to stay away from broad generalizations, and suggest more research including “correlating neuropsychological findings with neuroimaging.”

On the other hand, the abstract of the Study out of Tufts University concludes that "Sjögren's patients perceive deteriorated physical function over time, but they achieve a level of functioning comparable to controls despite the burden of their illness" (click here for the abstract). In my opinion, that language is a bit misleading. Making physical conclusions about a cognitive study makes little sense.

Perhaps, if a rheumatologist who regularly evaluates patients and the glandular and extraglandular manifestations Sjögren's had been involved in the study, he/she would have taken other issues into account.

While it is always good to see new research on Sjögren’s, it’s also important that the authors identify the scope and limits of their research.

Thanks Julia for your excellent post and bringing it to the attention of all us Sjöggies.

What did you think of the Tufts Study?  If you could suggest new research on Sjögren's, what would you focus on?
at 4:11 PM 1 comments