I am finding it very hard to write about my own health issues right now.  All I can think about is a very close family friend who tragically lost his three-year battle to brain cancer this morning.  This young man was diagnosed at the young age of 24 while a law student. He was determined to stay in school, become a healthcare lawyer, and live as normally as possible. He just wanted to get on with his life, past his cancer, and every time he was about to the horrible, pernicious tumor would start to grow again.  He went to some of the best hospitals and went through multiple surgeries and therapies, doing everything that could be done.

The two of us bonded over being young and sick.  But I knew that his prognosis was much worse than mine.  I just tried to put it out of my head.  I hoped and prayed that he could beat the odds.  He deserved to beat the odds.

What always struck me about him was his wonder at the world.  He wanted to learn things and soak them in-- and he was just really beginning to when he got sick. I can't think of any explanation for why this happened.

When I spoke with his mother on the phone the other day as her son was taking a turn for the worse, she told me how hard it was for her son not to be able to do the things he wanted to with his life, as well as not to be able to do small things for himself.  She said what is most important is being part of a family unit. This couldn't be more true.

I had a dream the other night that he was in his hospital bed on a tiny and beautiful tropical island with white sand.  The island was so small it looked like it was just floating in a sea of pristine blue water. I pray that he is there right now, free of his hospital bed and his illness and most of all peaceful. And that he knows how much his family and friends love him.

Coming back from vacation is always somewhat of a let down.  This time it was a little more than just not wanting to return to reality that made returning home unpleasant.  So soon after writing about what a wonderful time I had away, I have some not so good news and another medical adventure to share.

On our final day of vacation, I woke up with a mild headache and noticed a red rash on my arm. My first thought that was that I must have gotten too much sun the previous day.  I am fair skinned and have gotten sun rashes in the past.  I took over the counter headache medication and thought little of it for the rest of the day.  However over the next 48 hours it became abundantly clear that I was definitely sick.  My head was throbbing and I was intensely nauseous—not to mention my rash was still there and it was very hot to the touch.  I contacted my internist and thankfully she fit me in immediately.

Once she looked at me, my internist was sure I had Lyme disease and needed to begin treatment with doxycycline antibiotic immediately.  I had been in area with a large deer population making the Lyme disease diagnosis more likely.  Lyme disease gets worse the longer it is left untreated; and given that I am immuno-compromised and have autoimmune disease, early treatment was particularly critical.


I also had to stop taking steroids so that my immune system could properly fight the Lyme bacteria called Borrelia burgdorferi.  For now, I am extremely weak and will be planting myself on the couch and doing all I can to allow my body to recuperate.  This means doing my best to do nothing, which should not be hard given the way I am feeling.

I am far from pleased that I have another health aliment with which to contend and I hope that my body can fight it off appropriately without any long term consequences.  On the positive side, I am lucky that I did get a rash that caused me to go to the doctor sooner rather than later. Not everyone with Lyme disease gets a rash. I am also lucky that my internist saw me right away and got me started on treatment immediately.  I am trying to find a silver lining to keep my spirits up during this new health challenge.

To learn about the transmission, signs and symptoms of Lyme disease check out these links from the American College of Physicians and CDC.
at 1:58 PM 2 comments 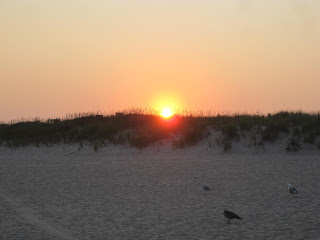 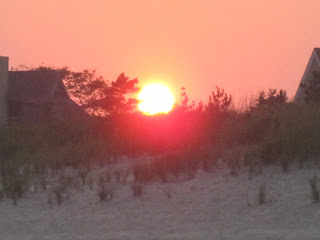 I had a wonderful week away at the beach with my husband.  What made the week special was that I was healthy enough for the first time in three years to enjoy our vacation.  I was able to play tennis for short amounts of time and enjoy the beautiful beaches and scenery.  There is something very soothing and meditative about watching the ocean.

Not being in intense neurological pain this year on vacation was a gift.  I was wishing, hoping, and praying before our trip that this year we could please just enjoy ourselves--that I would not be relegated to bed most of the trip or suffering and trying to smile despite how horrible I felt. When you are in that much pain, time goes so slowly and this vacation went by quickly.

We settled into a routine to help manage my fatigue and sun sensitivity.  We could do an activity in the morning and late afternoon, but in the middle of the day I needed to rest and stay inside out of the sun.

I truly felt like a kid again.  Some of my favorite parts of our time away were just playing pool frisbee with our friends and barbecuing in the evenings.  Yes, we were acting half our age even though we are all in our 30s.  And I found myself laughing again, well really I am a giggler, something that I had been able to do little of just a year or even 6 months ago.
at 9:42 AM 2 comments